Timberline Tours is proud of its rich whitewater racing history, with several previous guides racing on the USA Raft Team including both the Women’s and Men’s Whitewater Raft Teams. Whitewater rafting competitions usually involve several events throughout the summer season with a national event held every year, either in the spring or fall, to determine the USA Raft Team for the following season. The training, experience, and inspiration of the Timberline Tours guides who competed internationally as members of the U.S. Raft Team has added to the expertise of current Timberline Tours guides and fostered a proud legacy that will be remembered for years to come.

Listed below are a few standout accomplishments of the U.S. Women’s and Men’s Whitewater Raft Teams that included Timberline Tours guides: 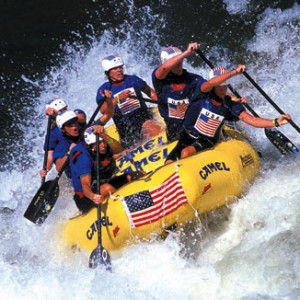 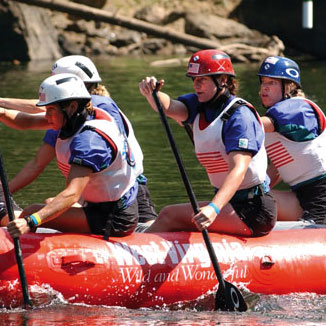 The U.S. Women’s Team traveled to Zambia, Africa in September 2001 to compete in the Camel Whitewater World Championships on the Zambezi River, one of the tougher rivers in the whitewater world. The team raced to win a gold medal in the downriver race, taking just over an hour to accomplish this feat.

Also in the autumn of 2001, the U.S. Women’s and Men’s Whitewater Raft Teams returned to the USA for the International Rafting Federation World Championships held on the Gauley River in West Virginia. The U.S. Women’s Team won a gold medal in the sprint race to finish out a terrific 2001 season.

In 2003, the U.S. Men’s Team, Behind the Eight Ball, and the U.S. Women’s Team, Team Timberline, who joined forces with a few of the women from a California rafting team, headed to the Czech Republic for the International Rafting Federation World Championships. The men placed fourth overall.

In the summer of 2005, the teams headed to Ecuador to compete in yet another World Championship. They competed in the largest field of men’s and women’s teams since the event’s inception. The women placed third in a grueling hour-long downriver race, and the men placed third overall.

Whitewater raft racing pits teams of four to six paddlers against one another in a combination of events including sprint, head-to-head, slalom, and downriver races. Endurance, finesse, teamwork, and courage are put to the test as competitors race for the overall title. These men and women acquired an arsenal of advanced paddling techniques over the years and followed a committing strength and endurance workout schedule. Armed with hard work and determination, they proudly represented Timberline Tours and the U.S. as they raced around world wearing red, white and blue. 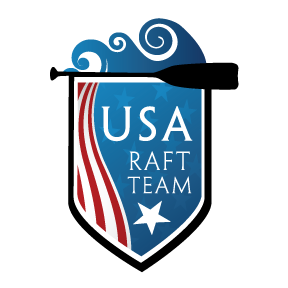